We can take a 7th person at an additional $2660, however we recommend 6 people for these 5 night trips.

The underwater terrain consists of a series of banks, the 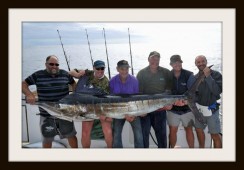 Middlesex and King Bank which are home to some of the best recreational fishing New Zealand has to offer including Kingfish, bill fish and also pelagic fish such as Marlin, Tuna and Mahi-mahi.  The warm nutrient currents and upwelling's pushing up over these banks and the abundance of bait fish makes this a Yellow Tail Kingfish meca putting the most experienced anglers to the test whether jigging or on live baits.  With large numbers of fish from 15 to 20kg and up to 40kg's plus, stripped marlin also congregate here in the summer months along with excellent snapper fishing around the northern coastline including Cape Maria Van demon. This all makes Three Kings New Zealand's premier game fishing destination. 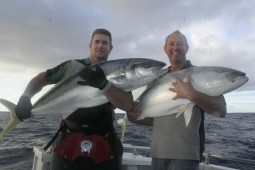 Trips to the Three Kings depart from Whangaroa in aprox 3.5 hours drive north of Auckland, about an hours shuttle ride from Kaitaia or 35 mins from Kerikeri domestic airports.  A minimum of 5 days for this trip between March and May. 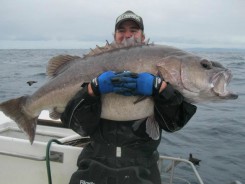 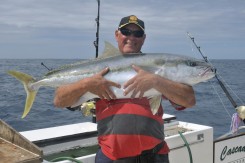